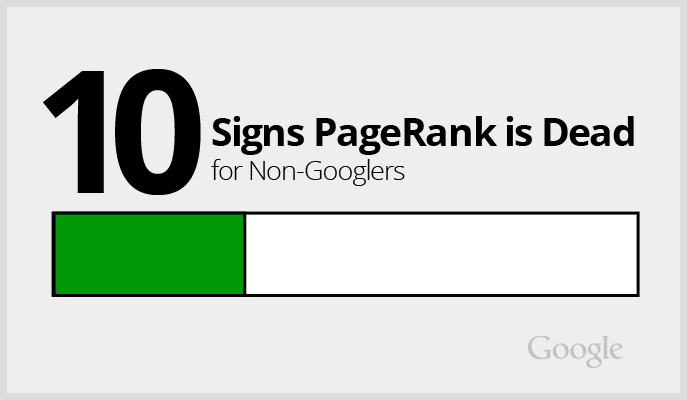 I keep seeing the same question posted over and over, “Is Google PageRank Dead?” My thoughts are yes and no. Yes, it’s dead to those outside of Google. No, it’s not dead to Googlers (people who work at Google). In other words, I still think Google uses PageRank as a part of their organic ranking algorithm. I just don’t think they will push PageRank out to the public anymore.

I did a little research and came up with 10 signs, from which we can safely assume Google PageRank is dead to non-Googlers. While researching this topic, one thing I noticed killing off Google PageRank for non-Googlers has been in the works for a while. For years Google has been throwing us hints, and slowly removing PageRank data from our grasps, until one day it was gone.

In 2009, Google removed PageRank data from Webmaster tools.  I know this happened nearly 5 years ago, but now we know it was a sign of what was yet to come. Maybe this will help us predict Google’s future a little better. After all, the best way to predict the future is to know the past. This was their explanation as to why they removed PageRank from Webmaster Tools:

We’ve been telling people for a long time that they shouldn’t focus on PageRank so much; many site owners seem to think it’s the most important metric for them to track, which is simply not true. We removed it because we felt it was silly to tell people not to think about it, but then to show them the data, implying that they should look at it.

Checkout this graph I whipped up. It shows the number of times Google updated PageRank for non-Googlers, since 2006. As you can see, Google has consistently released fewer PageRank updates over time. 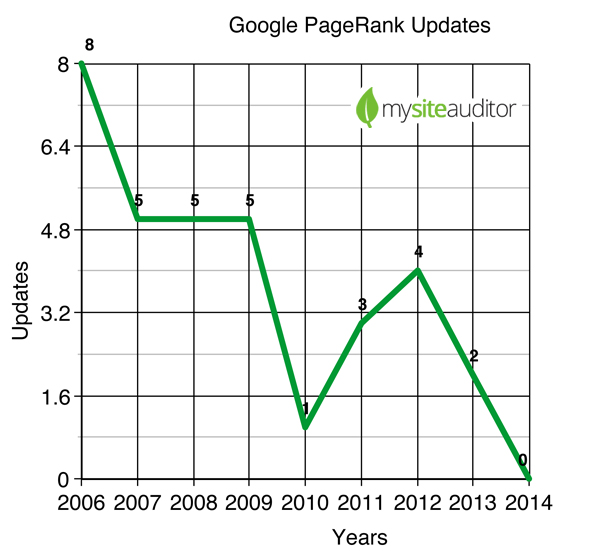 3. PageRank never was added to Chrome.

On October 6, 2013 Niels Bosch tweeted a question to Matt Cutts, Head of Search Spam, asking if we should expect a PageRank update before 2014. Matt Cutts responded by saying, “I would be surprised if that happened.”

Previous to Matt Cutts’ response Google only updated PageRank once that year, on February 4, 2013.

5. PageRank was not updated for 10 straight months.

In 2013, Google didn’t update PageRank for 10 straight months. With respect to previous years, that was a pretty long drought. As I stated earlier, PageRank was updated on February 4th, and it was not updated again until December 6, 2013. Historically Google has updated PageRank three to four times per year. A 10 month delay was a sure sign that something was changing.

6. Matt Cutts says the PageRank “pipeline” is broke, and Google isn’t interested in fixing it.

On October 23, 2013, at Pubcon Matt Cutts stated that the PageRank “pipeline” is broke, and Google isn’t interested in fixing it. The pipeline is what Google used to send updated PageRank data to toolbars, for non-Googlers to see. Even though Google may update PageRank internally everyday, it only pushed data updates to non-Googlers, via toolbars, three to four times per year.

Matt Cutts, once said, “the reason why they (Google) still have it (PageRank) is not because SEOs use it but rather because searchers and users still use it to determine how “reputable” a website is.”

Strong words. He sounds a bit reluctant to still address Google PageRank. It also sounds like he wished they would have stopped updating Google PageRank data much  sooner.

I wouldn’t use PageRank or links as a metric. We’ve last updated PageRank more than a year ago (as far as I recall) and have no plans to do further updates. Think about what you want users to do on your site, and consider an appropriate metric for that.

Well, John hasn’t been fired yet, so…

As we just stated, PageRank is normally updated a few times per year. However, the last update was well over a year ago, on December 6, 2013. This gives a strong indication that updates have stopped.

10. PageRank became leverage for spammers, and Google knows it.

If you’re an SEO pro you’ll understand this. How many times were you contacted by people offering PR4, PR5, or PR6 links? I got it every day. That was a spammer’s angle. Spammers sold links from web pages with high PR. The higher the PageRank, the more expensive.

I once had a colleague ask if we should entertain buying links from this company who had a great deal on PR5, PR7, blah, blah, blah links. Before I turned this horrible idea down we looked at the pages the spammer promised us links from. I was initially impressed with the high PageRanks. Then I searched the URLs in Google. Nothing Found! Those pages, with high PageRanks, were banned from Google, and still had awesome PageRank. WTF?

This exact problem was discussed in the video above, and that’s when Mueller’s now famous words, reassured us that we should not worry about PageRank anymore, and that Google would likely never update PageRank again. If PageRank was important, you’d think they would have solved this tiny and trivial task. Give banned pages a PR of 0. I’m not a developer but it seems simple enough.

Google created monsters when they created PageRank. They didn’t mean to, it just happened. Selling links with high PageRank became a cornerstone of link spam. In fact, Matt Cutts, Head of Google Spam, is tasked with mitigating spam on Google as much as possible. Half of his department was probably dedicated to the spammy repercussions of PageRank. Therefore, it was only natural that he lead this charge.

In March of 2016, it was reported that Google officially killed off Google PageRank for everyone outside of Google. In other words, PageRank data will no longer be available to the public. Internally, PageRank is still used in Google’s ranking algorithm.

Google PageRank is not dead to Googlers, but it is dead to us.  In all, I’m glad. Less spammy emails, fewer cheaters, and less confusion from the name “PageRank”. Fellow SEO professionals know what I mean by “confusion”. We have to constantly explain to clients the difference between PageRank, and your page’s ranking in search engines. It just got annoying. But it is ironic. Larry’s last name is “Page”, hence the term “PageRank”. I really hope you knew that.

If you still need some sense of how well you are doing in search engines, get your OMS Score from OptimizeMySite. Your score will tell you how optimized your pages are for search engines.