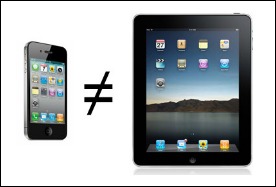 Many people think tablets are a part of the mobile family and, well, they’re wrong.  I keep seeing tablets mis-categorized in articles and tweets and posts and quite frankly I just can’t stand it anymore!  My fury on this topic has grown to the same level as when people say “I could care less” when they actually mean “I couldn’t care less.”  But that’s a whole other topic.  Let’s focus on why people are lead to make such a fatal flaw and how it’s affecting their digital strategy.

What People Fail To Consider When Categorizing Tablets

There are 3 main areas people fail to consider when referring to tablets as mobile devices:

Each area will reveal key insights into user habits and help you better understand why you may need a separate tablet strategy.

1. When/Where People Use Their Tablets

One of the most controversial aspects of this topic is how people define the term “mobile.”  If you consider mobile as “capable of moving or being moved readily” (dictionary.com) then tablets are absolutely mobile.  I can easily place my iPad in my purse and browse the Internet, take pictures, play games, the works!  However, based on recent research, people don’t generally use tablets to access information outside of the home.  If I’m walking down the street and need directions, I pull out my smart phone.  If I see something funny on the bus, I’ll take a picture and text it to a friend.  So yes, tablets are mobile but they’re not nearly as mobile as a smart phone.

Jeff Beeler of Sync Creative, compiled data from “The Mobile Movement Study” and “Google Tablet Survey” to better understand where people are using their tablets and smart phones.  Although both are used at home a majority of the time, data revealed that mobile phones are used far more often on the go and at work.  This is quite interesting considering the inherent portable nature of the tablet. 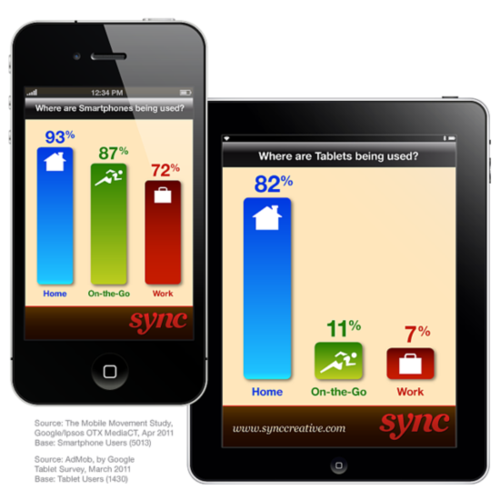 2. How  People Use Their Tablets

There are very distinct usage habits for both the mobile phone and the tablet.  Although there are definitely a few areas where the usage overlaps, there are far too many differences to ignore.

On top of tablets being predominantly used at home instead of on the go, they’re also considered a shared household appliance rather than a personal mobile device (Are You Wasting Mobile Dollars? Search Strategies for Smartphones vs. Tablets). Mobile phones are a very personal communication device that many hold near and dear to their heart. Most people won’t voluntarily share their phone for others to access information.

They Use Them for Activities That Require a Longer Battery Life 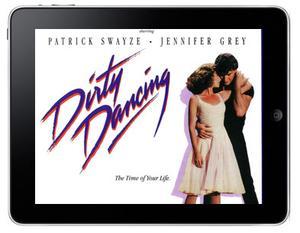 People can use a tablet (iPad specifically) for up to ten hours at time without having to charge it.  Even mobile phones with the best batteries can’t last that long with continuous use.  The tablet was developed to withstand longer periods of usage without a charge due to the activities it was intended to be used for-Internet browsing, gaming, streaming video etc.  All of which are in line with what people use laptops for.  Some think tablets are so much like laptops that they’re natural competitors.

Anders Rosenquist from Zazz actually noted that contention at a recent panel at MobileNortheast in Seattle last year;

“Looking around the room, those of you with tablets don’t have a laptop. It is kind of a laptop replacement…. I think the place where it has really put the pressure on is in personal computing….”

Recent stats show that Rosenquist might just be right, “Nearly a third of users, 28%, said their tablets served as their primary computer, with the vast majority, 77%, reporting decreased use of their desktop and laptop computers after acquiring a tablet” (The Top Use For Tablets: Gaming (STATS)).

Although content accessed by non PC devices overall is suggestive of being on the go, different devices are used to serve unique and particular needs and interests.  In the case of tablets, popular information accessed includes:

Keep in mind that even though tablets are used for a majority of the same activities as mobile phones, people are more than TWICE as likely to use mobile versus a tablet when shopping, running errands, and commuting (Are You Wasting Mobile Dollars? Search Strategies for Smartphones vs. Tablets).

They  Connect to the Internet via WiFi

Tablets are also far more likely to connect through a WiFi Connection (Are You Wasting Mobile Dollars? Search Strategies for Smartphones vs. Tablets).

A prime component of a smart phone is having Internet access at all times.  If a majority of tablet owners are connecting to the Internet via WiFi, then users are less likely to use the tablet to get information where WiFi isn’t available-in the car, walking down the street, in stores, etc.

3. How  Websites Are Affected by the Tablet

Beyond usage components, tablets are unique in how they interact with websites.  For the most part, tablet devices typically view standard websites vs. mobile optimized sites (Are You Wasting Mobile Dollars? Search Strategies for Smartphones vs. Tablets), but there are some other variations to note.

With these development components in mind, would you rather have your site show up on a tablet optimized for mobile or with no mobile considerations?  Either option is a complete mistake!  Tablets can be best described as hybrids of laptops and mobile devices rather than one or the other.  So take these nuances into consideration and create a unique tablet experience for visitors if it’s necessary.

But How Do I Know If a Separate Layout/App is Necessary?

If you’re wondering whether you need a separate layout for a tablet, I recommend the following: 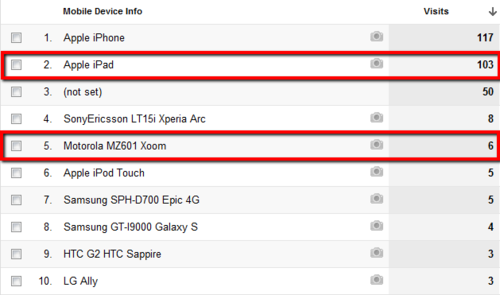 Take a look at your analytics and see what percentage of monthly site traffic is from tablets. There’s no percentage set in stone, but if you see a relatively significant amount, investigate further.  See if those users have an abnormally high bounce rate or exit percentage on certain pages.  You may find out that some of your pages work well on tablet while others do not. Use these stats as a starting point. Just because 5% of your traffic comes from tablets doesn’t mean that you need a new layout now or ever.

2. Navigate your Site on a Tablet

Take time to test your site on a tablet.  Navigate through and see if you encounter any issues with drops downs, flash components, entry fields etc.  If you don’t own tablet, try using ipadpeek.com to see how your site may render.  It’s not a perfect testing environment but it can give you a general idea of what it looks like.  Keep in mind that even though a site may be visually ok on ipadpeek.com, users still may have issues navigating via the touch screen.

Don’t be afraid to jump on Twitter or Facebook and ask your following if they’ve experienced any issues.  I’ve had many clients address tablet issues because a customer notified them via their Facebook page.  Your followers will understand that you’re trying to improve their experience and will be happy to provide feeback.

Developing Specifically for the Tablet

If you’ve determined that it’s best to develop a separate layout for the iPad you have a few different options:

1. Develop an application (app) that is completely separate from your website
2. Create a specific CSS for a tablet
3. Use responsive design to scale content based on screen resolution

Each have their pros and cons but their strategies recognize that a tablet visitor’s needs are different from those of mobile device and lap top users.

Tablets have characteristics of both mobile phones and computers.  So, don’t assume that your site or even your mobile site is optimized for tablets. If you’re truly concerned about the user experience on a tablet, do some investigative work and see if it’s worth creating a uniquely tailored experience for tablet users.